While heading to Barcelona, I decided to tweet a few things out. Rather than venting frustration or weariness, of which there was plenty, I highlighted good things that happened. Enjoy!

Gonna capture the good things in this long day of travel to try and fight off the grumps. First off, our lovely friend Kat took us to the airport and no traffic! (Not surprising at 4:30am but still)

In Oakland a stranger helped us roll our crazily overloaded cart up an incline so we could make it in one go. (Not pictured… the REST of the luggage hidden behind these carts 😅) pic.twitter.com/F5Yc2ouQJm

Loooooong layover in Oakland gave plenty of time to rework bags to better balance. Even managed to avoid any charges for bags being over weight limit 💪🏻

Oh and Asher lost a tooth before we even got off the ground!

Oh wow. Upgrading to first class was the best idea ever! 🤩😍😳 pic.twitter.com/OfszhbCG8w

Wheels down BCN 🛬 and I actually slept!

Settled in at the place we’ll be staying for next two weeks while we hunt for flats. Showers and everyone is less hot and cranky.

Well, after that last post you’d have expected that we had things all locked up before we went to our farewell picnic on Saturday night.

The picnic was a huge success. We saw people from many different aspects of our life and shared food, memories, and hopes for the future with them. The event drew quite a crowd, as you can see from this lovely group photo: 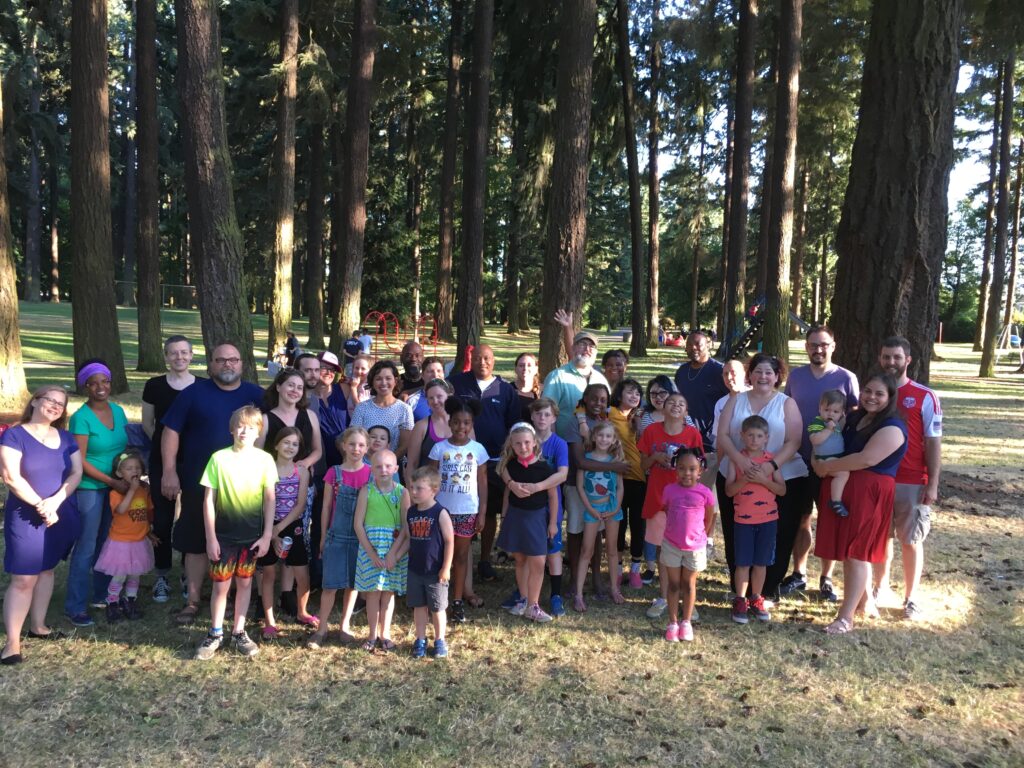 We left with huge warm feelings our hearts… and packing to do. Back at Anthony and Kat’s (our friends who graciously loaned up their basement since leaving the house we’d been renting), we got the kids down and got to work on those last couple loose ends. Our flight was early the next morning, so we planned to leave at 4:30. Any guesses how much sleep we got?

Yep, we worked the night through, stumbling and tired, but determined to get all the things packed up and buttoned away.

Our beloved friend Kat got up with us in that dark morning hour and took us in our van to the airport. (We’ll be finally selling the van in September when we’re back around in Oregon while getting visas finalized). Tears and hugs were shared, and then we were off to get luggage checked.

Did I mentioned we had a lot of luggage?

Amber did a spectacular job of keeping the bags under weight, evenly spread, and tightly packed. But moving your entire world still amounted to an impressive pile. Thank goodness for curbside check-in at PDX!

TSA Pre also paid its way handily. Even with the kids in tow, we slid past security with only one forgotten pocket knife to slow us down.

The first leg was a short hop to Oakland. By a miracle, we ended up in the first row behind business class, which meant the under-seat space was larger than average. Good thing, because our carry-ons pushed the limits of what many would willfully lug down narrow plane aisles. Before we knew it we were landed in Oakland, off the plane, and picking up our luggage.

Picking up luggage? Why couldn’t they just check through? As you may have gathered from our earlier discussion on plans, things have been rather fluid around when we’d actually leave. We’d bought cheap OAK -> BCN tickets, but had been expecting/hoping to already be in San Fransisco getting our visas issued. Hahaha, nice try. So at the last we bought tickets on Alaska Airlines to cover the PDX -> OAK leg. Did those end up being on a shared airline that could check through? Nope! Thus we found ourselves back in possession of the mountain of luggage in Oakland.

No problem, we’ll just wheel over to the Norwegian Air desk, check in most of it, and cruise on through the all those services behind security, right? Nope. Turns out, the front desk for Norwegian only opens 4 hours before their first flight… the 4pm to Barcelona we were on. It was roughly 9AM, we we had hours to sit with our train of luggage carts out where only one restaurant greeted us. We shuffled bags around and made use of the time, but everyone was tired, hungry, and ready to leave that airport by the time we actually checked in.

We were excited to have upgraded to the Premium Cabin on the long leg of this flight. To get the flexible scheduling and baggage we needed, Premium was only a few hundred dollars extra per person, so we splurged. Norwegian is a budget line and the equipment was clearly second hand (from Arik Air apparently?) Many of the integrated controls didn’t work properly, the reclining seats clattered relentlessly when in motion, and the crew handed out iPads for the in-flight entertainment as the screens were mostly inoperable (3/4 of ours wouldn’t respond to the remotes at all). But, and it’s a huge but, the space was AMAZINGLY WORTH IT! I actually slept 5-6 hours on a plane y’all! That never happens, and sure helped smooth the remainder of the day after landing Barcelona. 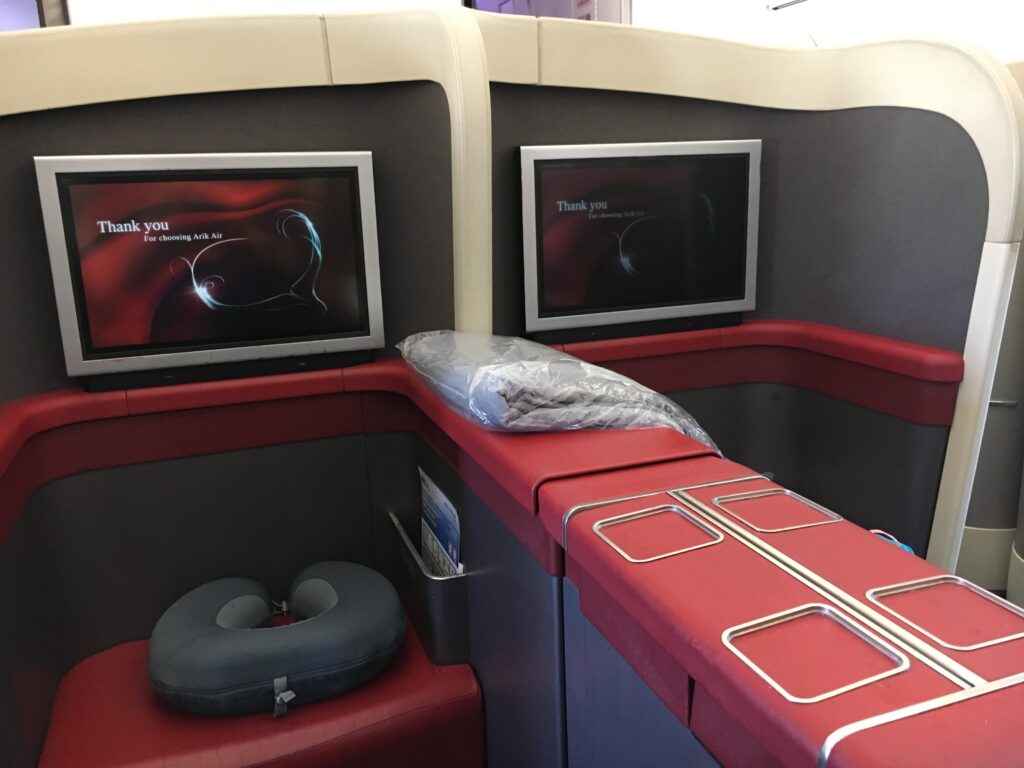 Since our flight left Oakland at 4pm, we ended up in Barcelona about noon. Customs was a breeze, and we found ourselves grabbing a taxi in the heat of the day to the high-tech hostel we’re spending our first couple weeks at while we hunt for a flat.

As it was the middle of the day we did a little exploring, but I’ll save that till next time and rest content that the Clarks have arrived in Barcelona!

Way back when we started this process, the immigration services New Relic contracted with told us to expect the paperwork for residence + visa to take about 30 business days. So earlier this summer, when the documentation was ready for everything to kick off, we bought a cheap flight on Norwegian Air for July 22, a good couple weeks past that 30 day processing time. Smooth right?

It turned out we needed to physically show up at the Spanish Consulate in San Fransisco to request the visa process start. That required an appointment, which was backlogged almost two months beyond the “normal” timing the immigration service was expecting. Our appointment date? September 4th.

This development left us in limbo. We’d unsuccessfully petitioned the consulate for an earlier appointment since my visa was supposed to be fast-tracked, but as June closed out, July departure was looking less and less likely.

Complicating that further, we needed to leave the house we were renting toward the end of June. We had enough trips, family, and friend visits to pack out until our July departure date. But “hanging” for all of August? :massive-sigh:

Our residence paperwork completed, so we had the necessary numbers to rent a flat in Barcelona, open bank accounts, etc. A plan emerged. With those cheap flights, it wouldn’t be outrageous to take our July 22 flight out, then come back in September to settle our visas. We can live in Spain for August as visitors, get a flat, start sorting out the new shape of our life there, then come back for the visa.

Apart from expense, the only other hang-up is around my eye condition and insurance since I won’t be working for New Relic Spain until the visa is through. “Luckily,” my eye is at a stable (if crummy) stage. We’d only see the retinologist once during that month–a lot of wait and see–so I’m trying to schedule with my referrals in Barcelona. At worst I’ll  just postpone a couple weeks to see the doctor stateside when we’re back in September.

All this to say… it’s T-minus one week until the Clarks leave for Barcelona and our new adventure!

Through a series of wildly unexpected occurrences, the Clark family is moving to Barcelona, Spain! New Relic has an office, which made obtaining work in another part of the world so much easier.

There are a number of common questions that come up too:

We’ll be using this blog for posting some stories and pictures from our travels since not everyone shares the same social networking sites these days. I hope you’ll join us!